Who doesn’t love peppers?  They’re crunchy, sweet or spicy, and they’re wonderful eaten raw or cooked.  If you’re like many gardeners, you’ve even plucked one straight from the plant and eaten it on the spot.

They’re not always easy to grow, but it sure is gratifying to see those small seedlings flourish and produce fruit. (Plenty of tips for growing sweet peppers in this article.)

Like many plants, peppers can benefit from some pruning during the season. It’s not necessary, but I suggest experimenting with it to see if you notice any improvement in your pepper crop.

Many gardeners ask the following questions about pruning pepper plants:

What pepper plants should I prune?

When should I prune?

How should I prune?

In this article, I’ll share some advice on the best methods for pruning pepper plants.

Why a Gardener Might Want to Try Pruning Pepper Plants

The first thing to understand about growing pepper plants is that they’re a warm season crop.  They should never be planted outside in your garden until all danger of frost is past.

Of course, if you’re impatient and want to jump start the season, you can start your seeds indoors and then transplant outside when the conditions are right.  Learn more about starting peppers indoors.

Peppers need very warm conditions to thrive, so it’s best to wait until it’s at least 70 degrees F during the day and no colder than 65 degrees F at night.  Your peppers grow faster in the warmth!

Sometimes, too much growth isn’t optimal, though.  Plants that put out excessive growth or the wrong kind of growth can become unwieldy and top-heavy, and they can also put too much energy into growth and not enough into fruit production.

Pruning pepper plants can improve the quality and quantity of your peppers. It also helps to stabilize your plants so they don’t become too tall and spindly, and pruning can also help to protect them from disease.

Pruning thick leaves and stems at the bottom of the plant also assures that your plant is getting all of the air flow and sunlight that it needs to remain healthy. 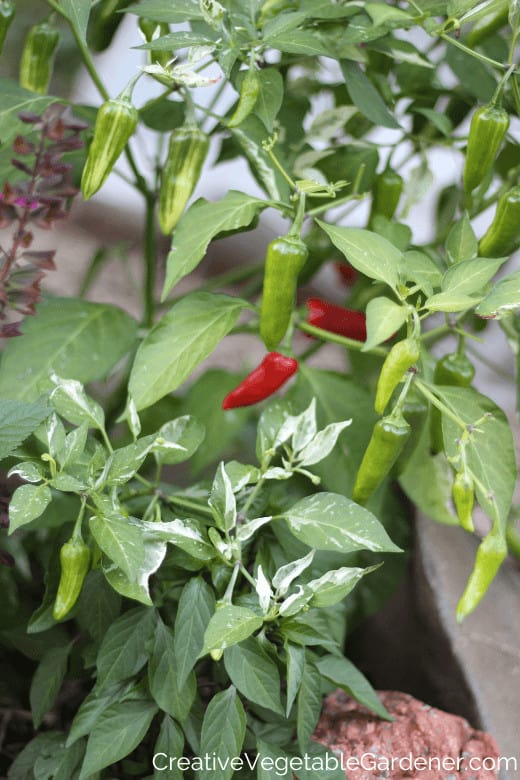 Which Kinds of Peppers Can Be Pruned?

If you’re like many gardeners, you plant a variety of peppers, including some that produce small fruit and others that produce large fruit.

In general, small- fruited varieties, including shishito, Thai hot, and jalapenos, benefit the most from pruning early in the season.  With these plants, you can prune the main growing point at the center of the plant when it’s about a foot tall.

I do this when my pepper seedlings are still in their pots, either inside or out in my yard being hardened off. You can also prune them after purchasing seedlings or right after planting them in your garden.

Removing the main growing point encourages the plant to put out more side branches which will result in a bushier plant, instead of one that’s tall and lanky.

With large-fruited plants such as bell peppers, it’s not usually recommended to prune out the main growing tip because it could compromise the plant.

With all pepper plants, prune suckers and remove dead or damaged leaves throughout the season.

This advice seems counter-intuitive because blossoms become fruit and the fruit is what we want, right?

However, sometimes your young plant will get too eager and start blossoming before it’s ready. You should pinch off these early blossoms so that the plant has time to grow and become sturdy before it starts putting most of its energy into production.

If you purchase a pepper seedling that is already flowering, pinch off the flowers right away. This is often a sign that the plant is stressed and is trying to reproduce before it dies. Personally, I wouldn’t even buy a pepper seedling that already had fruit on it. If you do, pluck that fruit right off before planting.

You can remove the premature blossoms with your fingers by carefully, gently pinching the white flower off of the stem.

In my garden, I remove all flowers when starting peppers indoors, and after planting my seedlings, I revisit my pepper plants several times those first few weeks and pluck off the flowers until I feel like the plants have established themselves and put on some good growth.

If you want to experiment, you can also remove excessive blossoms throughout the season to encourage the remaining blossoms to produce large, high-quality fruit.

How and When to Prune Pepper Plants

There are several critical points during the season when you should be thinking about pruning pepper plants.

Prune very young plants when they’re 6-8 inches tall and have several sets of true leaves. If you start pepper seeds indoors, you can prune the seedlings while they’re still under the lights. If you purchase pepper seedlings, prune them right away.

Plants can appear a little tall and spindly, and the pruning encourages them to become bushy and more stable. More and stronger stems produce more peppers!

At this stage, it may be easiest to use small clippers. (I love these!)  Pinch or clip the central stem and remove any excess blossoms.

Throughout the season: prune branches and remove dead or diseased leaves.

Clipping the bottom branches of pepper plants keeps leaves high. You don’t want them to touch the soil because they could be exposed to soil-borne diseases. Removing and properly disposing of the dead leaves also helps to prevent the spread of disease.

Remember to sanitize your clippers regularly when working with diseased plants. Place the diseased leaves in a plastic bag, seal it, and put it in the trash can.

You can also remove the suckers as they emerge. Suckers are small shoots that appear where the leaf meets the stem.

If the plant seems to be putting out too much dense growth, you can remove the smaller branches so that the larger ones can get more light and air.

About two to four weeks before your area’s average first frost date, you can attempt to hasten ripening of your remaining peppers by cutting away any stems that don’t have fruit on them.

This can encourage the remaining fruit to grow and ripen before frost. The plant’s growing season is already over, so the focus now is just on coaxing the remaining peppers along until they’re big enough to harvest.

With your clippers, prune the non-producing branches, and remove any blossoms.  There’s no time for them to mature now, anyway. You might also want to remove very small fruit that’s not likely to mature so that the plant will put all of its energy into nurturing the larger fruit.

I’ve never tried overwintering my pepper plants indoors, but I think it would be a fun experiment. You can read more about the process here.

Prune Now for a Bountiful Harvest!

If you follow these tips, you’ll have a bountiful supply of peppers all season.  They’re great cooked into casseroles, stuffed, or eaten raw. You’ll also want some of those savory, sweet peppers for those cold weather soups and sauces!

Read more about how to freeze peppers so that you can enjoy that delicious taste all year!

And if growing peppers is challenging for you, read my ultimate guide to growing sweet peppers.